Through the debates of those running for the School Board, a question was raised about what each candidate would be willing to sacrifice in order to keep finances in order in the future.  Two candidates indicated that they would support closing Parkview Primary in Mayville to save costs.  (Reference video of Candidate Debate.)

This effort was reviewed and discussed in pre-referendum committees prior to the referendum over a year ago, and would not save the district money.  Simply put, the Middle School would need an extensive addition and the only savings would technically be in administration costs.  The savings would not support the payments needed for the addition for the Middle School.  Yet, past grievances were brought up in the debate on decisions made in the school district in decades past and were attempted to be used to justify significant changes in the future.  This dwelling on the past and negativity must not be allowed to spread.  We must remain focused on the positive and make sound financial decisions in the future.  We cannot make irrational decisions in the future because of these past grievances that affected previous generations.  We must move forward together.

Let’s review why Parkview is so important!

The group opposing the referendum  circulated flyers around town prior to the referendum advocating the closure of Parkview Primary School.  That mentality is still present in the minds of some of the candidates running for the Board of Education (Reference video of candidate debate here.)

Parkview Primary, which has eleven classrooms, currently educates our youngest learners from 4K through 2nd Grade. The naysayers’ plan used to attack the referendum is apparently to shut down the elementary school and its eleven classrooms and move the children into the middle school.  What a terrible idea!

Closing Parkview Primary has been previously opposed by many members of the Facilities Study Committee (FSC) and the YES 4 Our Community Group for the following 5 reasons.

Young learners need a little bit different environment than older students.  Having Kindergarteners sharing the building with Eighth-Graders is not a good solution.  Smaller class sizes are also crucially important for quality educational results.  Parkview currently has eleven classrooms and ten of them are in active use despite a historically small first grade class caused by the Great Recession. Trying to jam all those little children into a few new classrooms built onto the middle school will lead to larger class sizes and poorer academic results.

Ask a realtor, and you will hear that having a facility that is dedicated to 4K through Second Grade is a great asset for any community.  A selling point of the school district is that the young kids are separated from older students.  Further, Mayville has an advantage by having these kids in separate facilities. A K-8 facility is not desirable as young families don’t really care to have their kindergarten students share space with Eighth Graders.  Since Parkview is a key feature in attracting and retaining younger families in Mayville, closing it down will likely lead to less families choosing to make Mayville their new home.

The true costs for adding on to the middle school are much higher than the $2M to $3M claimed by the other side. As set forth by Matt Wolfert, the president of the leading school architectural firm in Wisconsin “in my professional opinion, more than just a few classrooms would be needed for the middle school to become a K-8 building… the core spaces of the middle school are likely not sufficient in size or quantity to support more learners and younger learners. The gym, cafeteria, kitchen, library, art, music, and special education spaces would need a more thorough analysis.“  Combining schools impacts everything; we’d be looking at new playgrounds, parking, losing a gym, and a host of other problems the naysayers have no plan to address.  Doing all this could cost $7M to $10M!

On the other hand, as the FSC determined, Parkview is in good shape overall. The structure is sound.   Recently, a secure entrance and cameras were added.  More work was done for mold remediation.  We just need to fix the HVAC, electrical, plumbing and enclosure issues.  Some further work is needed on Safety and Security. The referendum plan accomplishes all of this for a total investment of $1,350,000 and will position Parkview for years of future use with minimal investment.  For a fraction of the costs of closing Parkview, we can continue to have it and benefit from all the good it does!

The Great Recession of 2008 had a negative impact on student populations in Kindergarten and First Grade.  This can be observed in the enrollment numbers. 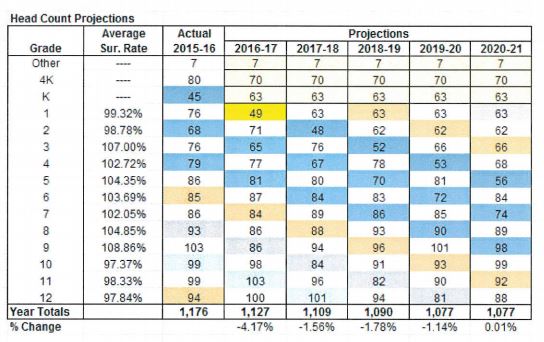 Families simply did not have as many children in 2009 and 2010 due to economic hardship.  However, the numbers are now rebounding and increasing.  Talk to any local realtor and you will find that Mayville’s realty market is coming back faster than other area community.  Homes are selling here, and many sales are to young families that are starting new jobs with area manufacturers.  When enrollment increases again, we need Parkview or there will not be enough space for students!

STEAM (Science, Technology, Engineering, Agriculture, Arts and Math) is a focal point for the school district.  It helps kids expand their knowledge in different areas to apply what they are learning to other areas.  It also empowers kids to gain exposure to different possible career paths long term.  The plans for Parkview include the addition of a Maker Space / Fab Lab where kids can learn more in working with 3D Printing, construction projects, and art projects impacting other educational areas such as science.  The idea is to make their education more exciting for them while allowing them to gain exposure to different areas and technologies that might be of interest to them in the future.  This will help them to be better students and to perform better in all areas of education.

No matter how you look at it, Mayville Needs Parkview and Parkview needs your support!  Vote YES 4 Parkview on April 3rd by supporting James Congdon, John Westphal, and Laangela Sheri Davis!